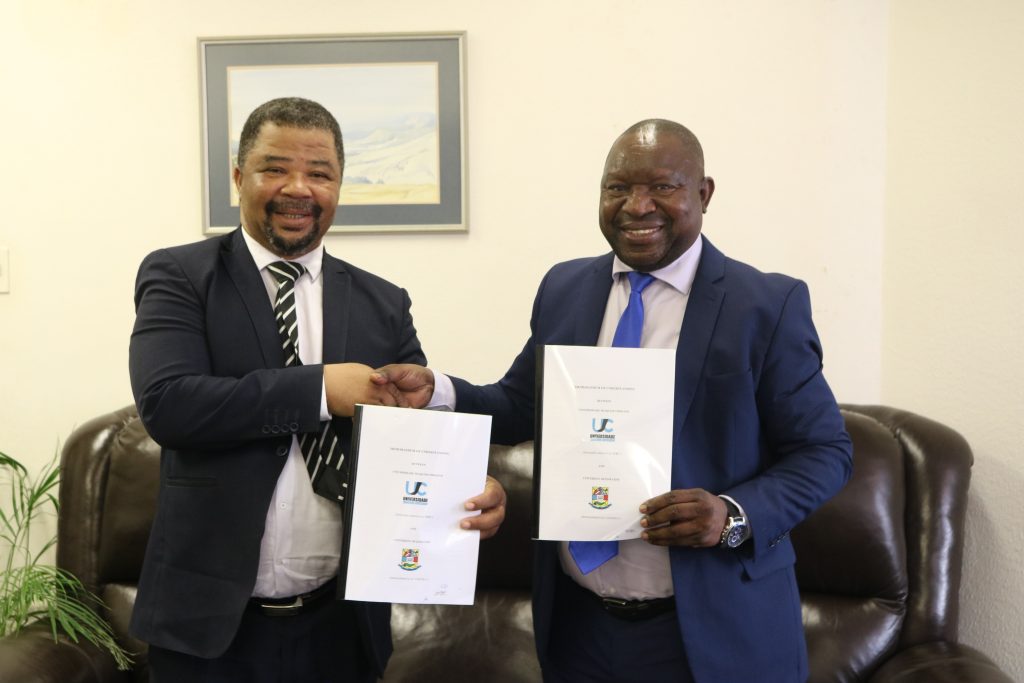 On the 3rd of August 2022, the United Nations Resident Coordinator to Eswatini, Mr George Wachira paid a courtesy call to the Vice Chancellor of the University of Eswatini, Professor Justice Thwala and his management team

In welcoming the UN Resident Coordinator, the Vice Chancellor said the university was honoured by the visit given the long history of partnership with the UN.

“We have a long history with UNDP and we worked well with your predecessor Her Excellency Ms Nathalie Ndongo-,” stated Thwala. The University was established on 1 July 1982 and currently had 7,800 students and they hoped to double that number soon.

Professor Thwala observed that the university needs to take its rightful place and limit the mushrooming of colleges around the country.

Professor Thwala stated that the University had eight conventional faculties and two institutes.  The Institute of distance education was fast growing and the University looks into developing it to meet the needs of the working student.

The Institute of Post-Graduate studies offers over 20 Masters degrees and Ph.D programmes.  Taught PhD programmes were offered in the Faculty of Agriculture on of the biggest faculties in the University.

The Vice Chancellor thanked the UN Coordinator for assistance received from UNDP to procure data bundles for students to access online learning material during the COVID-19 pandemic lockdown.  “Our students were able to continue learning during the COVID-19 era although they still have challenges as they did not have the necessary gadgets to be able to learn from home,” he said.  The Vice Chancellor also thanked the UN for the two grants received by the Eswatini Institute for Research in Traditional Medicine, Medicinal and Indigenous Food Plants (EIRMIP) from UNDP.  The Centre has been able to grow indigenous species with active medicinal properties in a protected environment to preserve them for the Eswatini nation.  “The University would appreciate further collaboration in this area with UNDP,” he said.

The university appreciated partnerships with various other UN agencies, including UNICEF, FAO and UNESCO.

The Vice Chancellor also appealed for strengthened partnership and support from the University internship programme to increase chances of employment for graduating students.

He expressed appreciation of the on-going partnerships between the university and the UN in Eswatini.  He underscored the importance of connecting graduates with job opportunities.

He expressed concern at the low rate of transition from primary school to secondary and high school. Statistics show that 70% of students do not transition.

He also noted that sustainable energy was a big topic globally. “There is an energy crisis around the world and as a country there is need to make sure that the energy sources are renewable and green,” he said. He mentioned that during the Commonwealth Summit for Heads of State in Rwanda, Kenya and Eswatini were mentioned as champions in geothermal energy production. He challenged the University to lead in research for sustainable energy to assist the country become self-sustainanble.  He also explained the new role of the UN Resident Coordinator system which is now completely detached from UNDP as of 2019.

His Excellency mentioned that the SDGs are at the centre of development. He noted the role of the university in conducting research for the development of policies and strategies for inclusive growth, working with the Government.

Mr. Wachira also informed of the management team of key global initiatives by the UN Secretary-General, including the Food Systems Summit convened in 2021 and the Transforming Education to be held in September 2022 on the sidelines of the 77th session of the UN General Assembly.