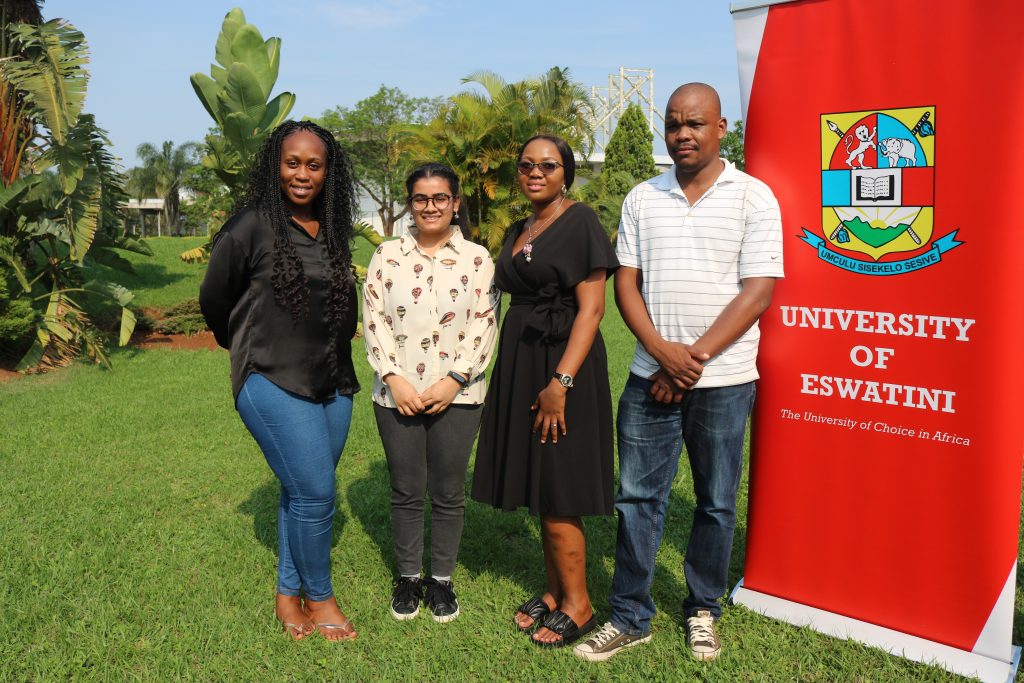 KWALUSENI – The University of Eswatini hosted a Press Briefing on Thursday 17 November 2022 to announce that 12 students would travel to India to compete at the UNESCO-India-Africa Hackathon to be held in Uttah Pradesh.  The Eswatini students had been sponsored by the India High Commission in Eswatini, UNESCO, the Indonesian Consulate in Eswatini, UNESWA Innovation Centre and the UNESWA Centre for Sustainable Energy Research.

The Programme Director for the day, Professor Sandile Motsa, Dean of the Faculty of Science and Engineering mentioned that the purpose of the gathering was to bid farewell to the students who would attend the UNESCO-India-Africa Hackathon.  The role of the University and the Faculty of Science and Engineering in the preparations for the event was to coordinate and make sure that Eswatini participated in the Hackathon.  The students with the right skills had to be selected and the preparation had taken two years. Six hundred students from 24 African countries would participate in the Hackathon.  The organisers had insisted on specific skills.  Initially, 20 students had been selected but only 12 would end up leaving for India as the eight could not receive passports on time.  Of the 12 students, 11 were from UNESWA and one from Botho University and would be accompanied by a Lecturer from UNESWA, Mr Banele Matsebula.

The Acting India High Commissioner in Eswatini, Ms. Susan Joseph in her send-off message noted that the event had to be postponed because of COVID-19 otherwise it was supposed to have been held earlier.  India was very proud to host the event which would hopefully bring solutions to mutual problems of India and Africa.  She also expressed hope that the team would enjoy the experience and return enriched.

In his farewell speech, the Pro Vice Chancellor, Professor Henry Gadaga on behalf of the Vice Chancellor who could not make it due to other commitments explained the meaning of “hackathon.”  “Hack” means “a novel creation or solution to a problem” and the purpose of hackathon is to generate solutions to a problem or situation.  The UNESCO-India-Africa Hackathon would be a 36 hours event.  The students would be solving problems on five thematic areas which are: education, energy, drinking water and sanitation, agriculture and health and hygiene.

Speaking on behalf of the Minister for Education Lady Howard Mabuza was the Principal Secretary in the Ministry, Mr Bhekithemba Gama.  The Minister appreciated the noble objectives of the hackathon that resonate so perfectly with the Ministry of Education and Training’s main objective, which is the delivery of high quality teaching and learning. The Minister also thanked all the partners that contributed towards ensuring that the students participate in the hackathon; The Acting High Commissioner for India in Eswatini, the University of Eswatini and the local office of UNESCO.

Ms Zandile Shabangu who spoke on behalf of the 12 students thanked the Government of India and the UNESCO Office for affording them the opportunity to attend the hackathon.  She also appreciated the University of Eswatini lecturers for giving them the necessary skills.  Ms Shabangu also passed her gratitude to the Eswatini Government for the relationship the country enjoys with the Government of India and the Ministry of Education and Training for all the assistance they had received. She acknowledged Mr Banele Matsebula for helping them in many ways. Ms Shabangu pledged that the students would take good care of themselves and they would make the country proud.